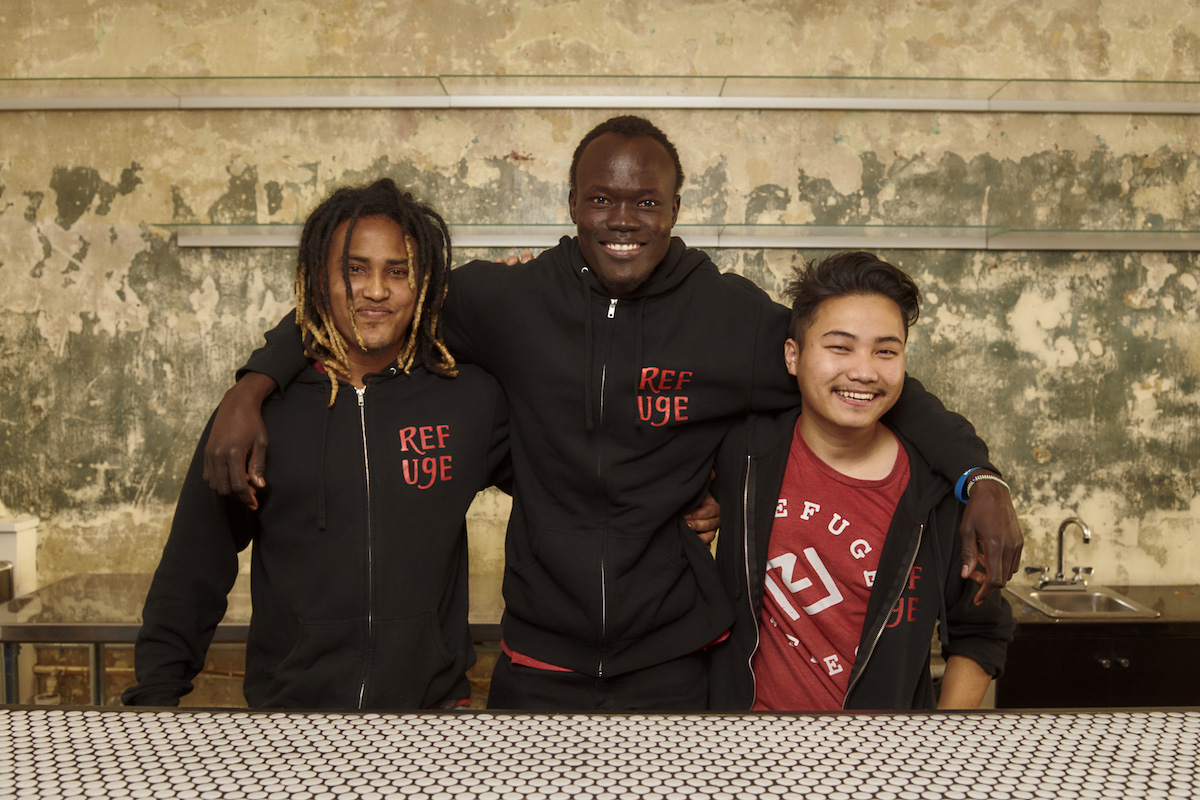 You’d never guess that James, one of our new Refuge Coffee trainees, is homesick. His smile is too broad. His handshake too firm, his embrace too warm. His gaze too genuinely interested in you.

But James is homesick.

He’s not particularly homesick for the Kakuma Refugee Camp in Kenya, where he spent 17 of his 27 years, a camp that was originally constructed to house 23,000 Sudanese refugees and has swelled to 181,000 today. He’s definitely not homesick for the githeri (a mixture of beans and maize) he ate every single day while in secondary school there. He is homesick for his family. For his mother, Yar, for his four younger brothers, and his sister. 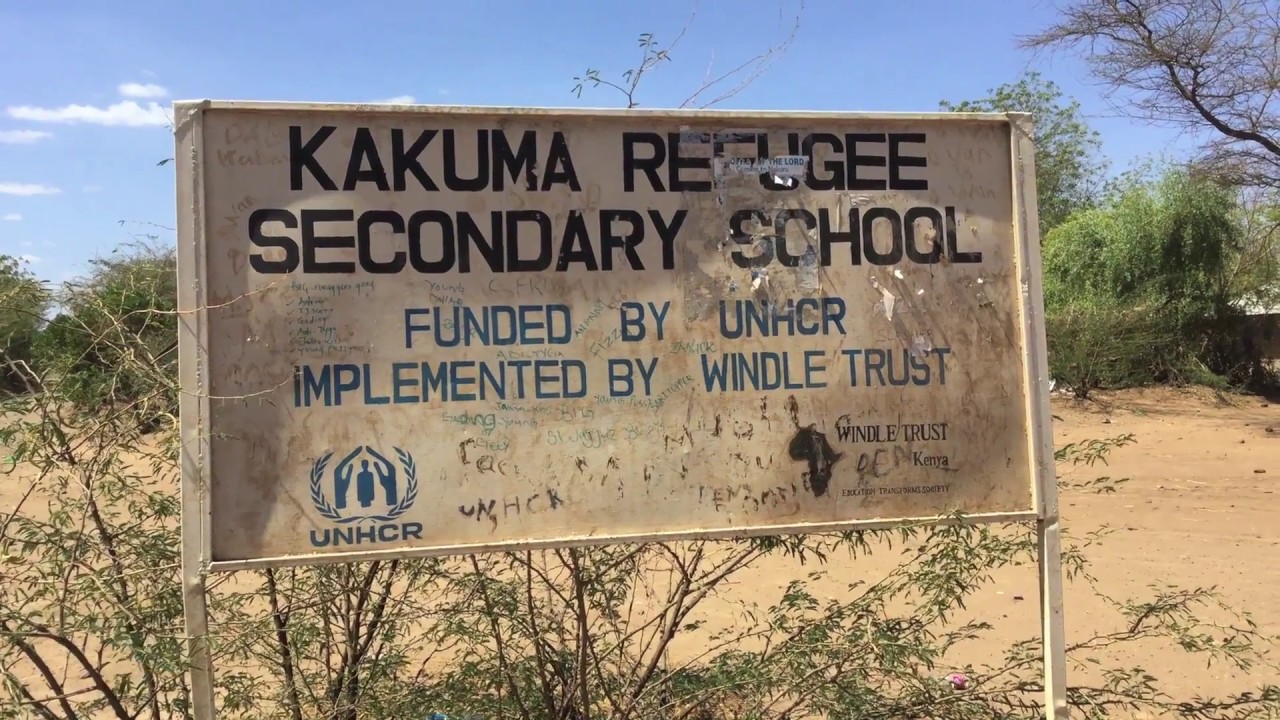 His mother and brothers are planning to join him soon. After living in uncertainty his entire life, James doesn’t have any illusions about what “soon” means. But he is hopeful. I look forward to meeting his mother and brothers. According to her oldest son, Yar is wise, determined, and always ready to help others. When they arrive, he’ll join them in the apartment that will be arranged for them by New American Pathways—the agency that resettled him here six months ago. Meanwhile, he’s living in Clarkston with roommates, working at Refuge, and soaking up all the training and friendships he can. I’m looking forward to an even bigger smile on James’ face on the day his family arrives.

Majok Risseh Makeny (James, to all of us) was born in 1992 in Andhara, South Sudan, in the middle of the second Sudanese War, a conflict that lasted from 1983-2005, and later erupted in South Sudan in 2013 and continues until today. That run-on sentence encompasses a time period in which roughly two million people died as a result of war, famine, and disease caused by the conflict. James recalls regularly hearing helicopters and racing for safety to bunkers with his family. He remembers the eventual quiet would signal that the attack was over. 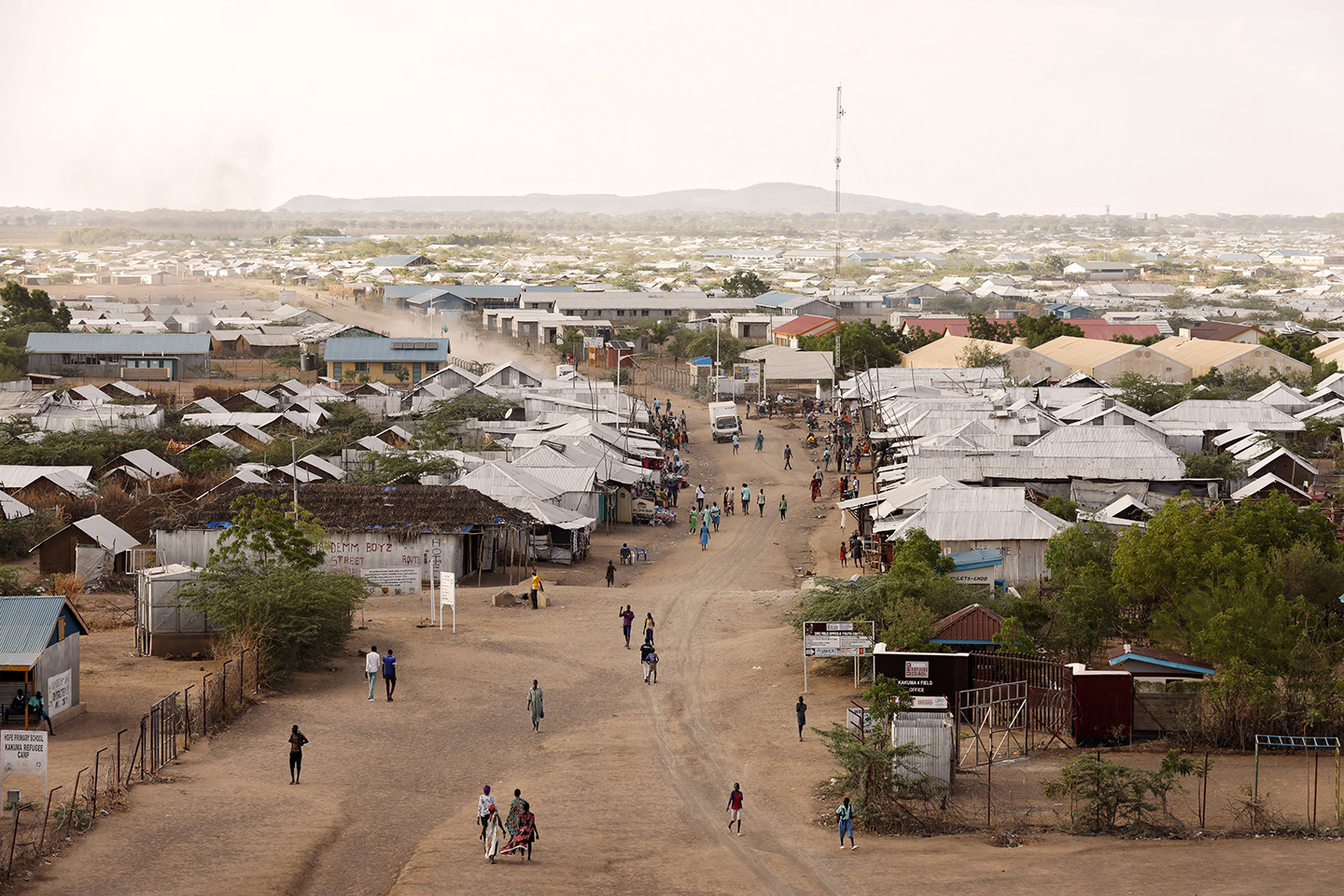 In 2002, when James was 10-years-old, his father arranged for the family to leave. He remained behind as a soldier after making sure his wife and children were safely away. The family traveled to a small town called Akot, where there was a tiny airstrip. they boarded a plane bound for Loki, Kenya, where they lived for 3 months and were processed at an immigration center. Next, they were packed along with many others into a big semi-trailer truck and driven to the reception area at Kakuma for more processing, this time living in a holding area for one month.

Before telling me the rest of the story, James says, “Oh, by the way, I was a very short boy when we moved to Kakuma,” and then he leans his 6’5″ frame forward and adds, “but I grew.”

James and his family are from what is called the Lake State (he says these “states” are like our counties) and is a part of the Dinka tribe. At Kakuma, people are settled in areas that correspond to where they’re from. And so, Group 21, the area where James and his family lived, is mostly populated with the Dinka Bar El Ghazal (“Dinka from one side of the Nile”) tribe. Over time the family moved from a tent to a tin-roofed home built by their community with supplies offered by the UNHCR. He made friends, attended school, played soccer, and discovered a love for learning. His father, a career soldier, visited once in 2005 for about a month. James later learned he’d married another wife, and then a third. He has not seen his father since saying goodbye in 2005. 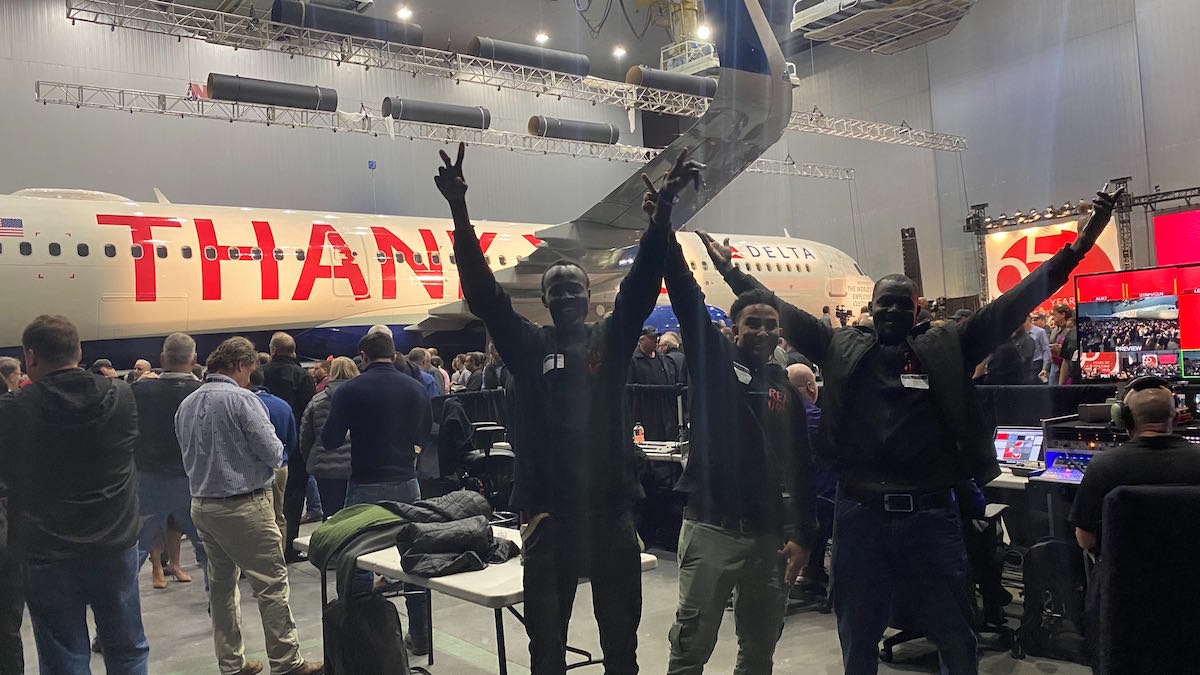 Yar applied on behalf of the entire family for resettlement with the UNHCR. James says she would often leave their home at 2:00 a.m., in order to walk to the field office several miles away. The office opened at 9:00 a.m. only on Mondays and Wednesdays, but lines began forming around 3:00 a.m. Eight years after his mother began the process, they got word that James was to be resettled in the United States as the first step in his family’s resettlement. Information trickled to him slowly. He next heard he’d end up in Georgia, and finally in a small town called Clarkston. He says “Clarkston” with a smile. Within weeks after arriving, he met Ali, one of our Refuge trainees who is now a supervisor. James is the third trainee Ali has recruited for us!

“The reason I was able to go to secondary school and come to the U.S. is 100% because of my mother,” he says, adding unnecessarily that, “she is very determined.”

Yes, James is homesick, and we share his hope that his family will arrive sooner rather than later. But we are also committed to being James’ family for now, and he is equally committed to us. He wants to go to college one day, to continue an education that got cut short after secondary school in Kakuma, and we are here to cheer him on.

One chilly early morning a few weeks ago, James was the first person to greet me when I arrived Refuge. That’s the day he told me his Dinka name, Majok. I told him I had a friend named Ajok and she was from Sudan. I think he was a little amused at my interest in their rhyming names. Literally minutes later, Ajok’s sister, Alut, showed up for a meeting with a neighbor. So, introductions were made and the two chatted. Later, James told me Alut and Ajok are also from the Dinka tribe. They’ve lived in Clarkston for several years and are both attending college.

I love that James gets to experience new things here. His first taco. His first job serving on the set of a movie. His first snowfall. But I also love that he gets to meet people from home, even if that home is a distant, painful memory. I love that he speaks English so well, improving every day more as he interacts with customers, more rapidly than seems possible. I love that he got to have a lively conversation with a new friend in Dinka. Refuge doesn’t make these things materialize, but I love that they happen here.

This place—the people, the passion for the work, the island of safety—is a true refuge because of homesick young men and women who have, somehow, determined to share their smiles with us.

Thank you for helping us create a space of refuge. Thank you for offering the hope of hard work that allows our neighbors to know and care for each other. Thank you. 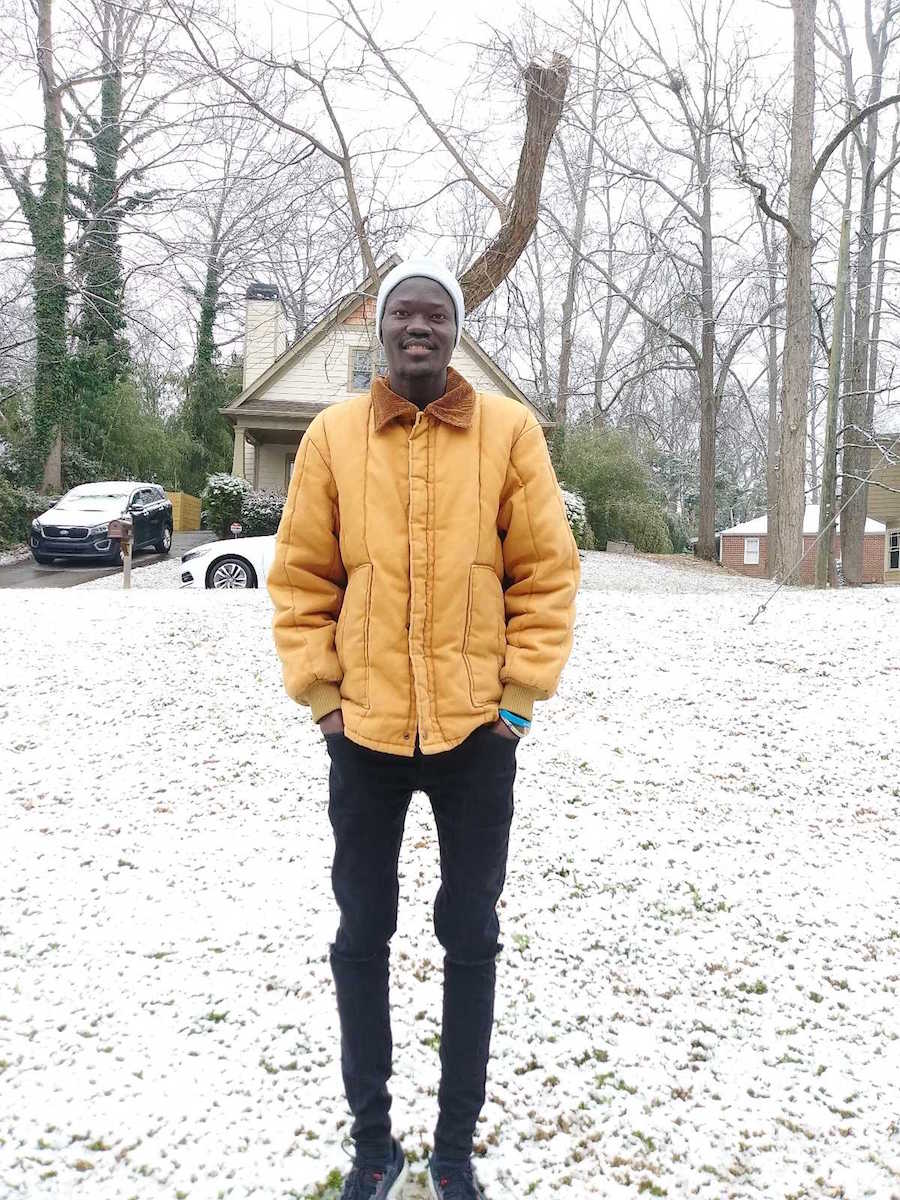 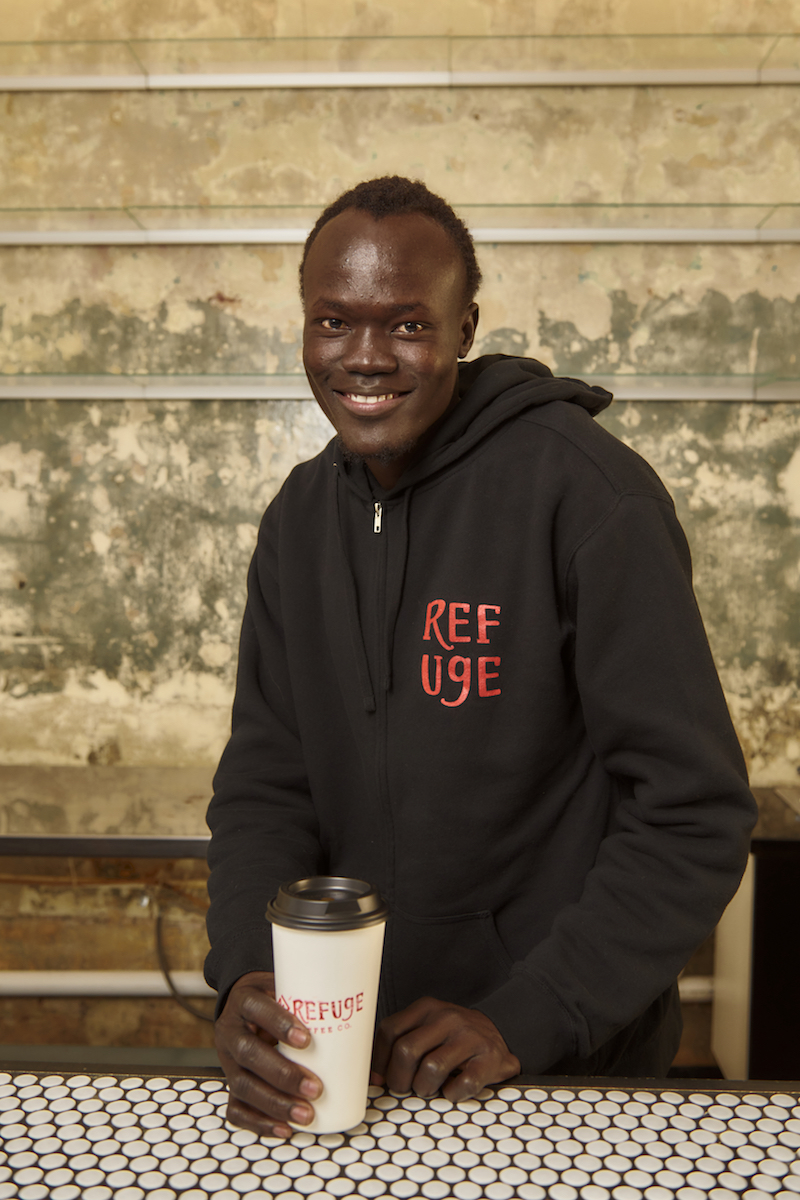 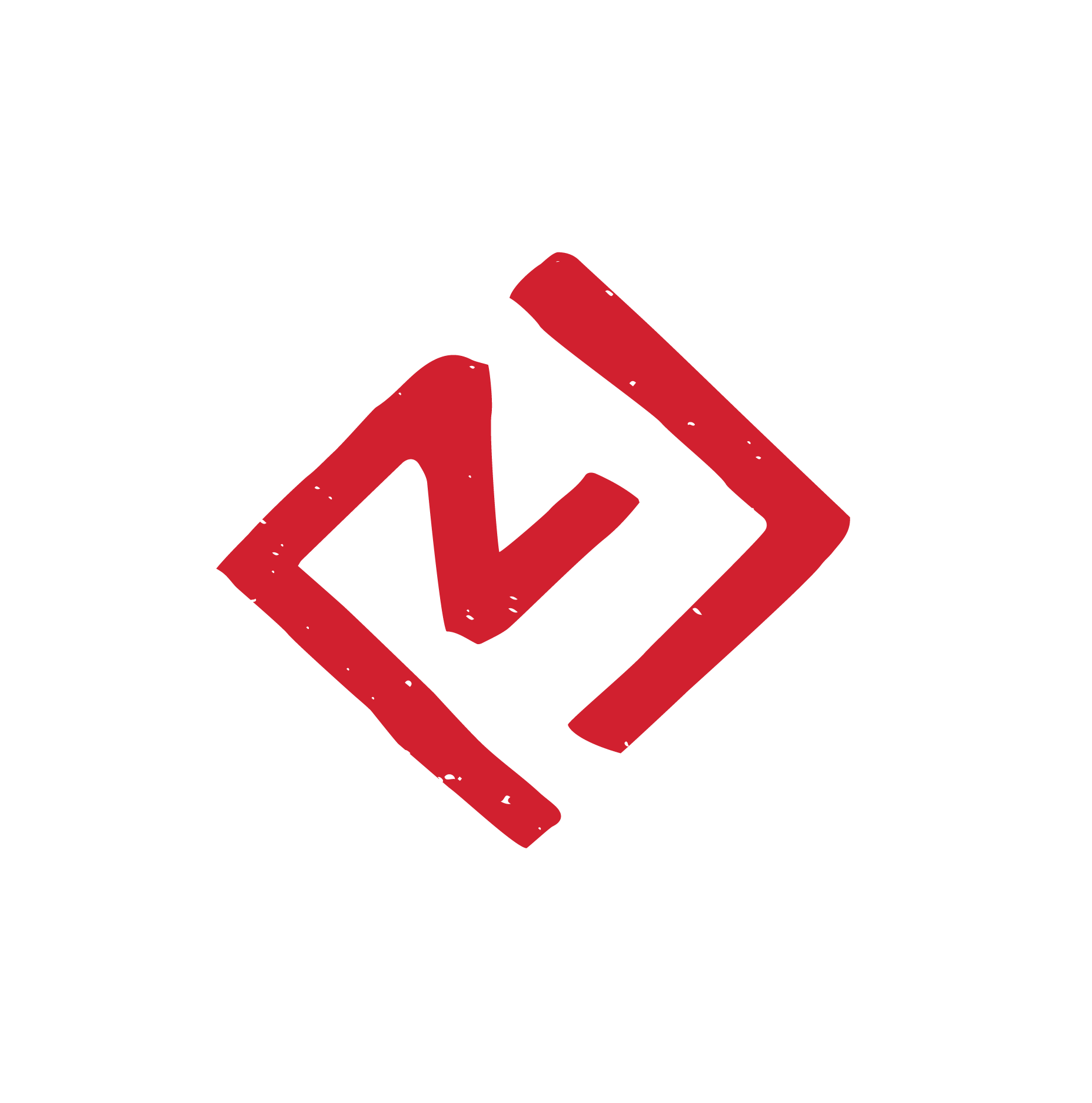